One Day in the 'Pearl of the Ionian'

The picturesque Mediterranean town of Taormina, also called the “Pearl of the Ionian”, can be easily visited on foot in one single day. But be warned, the stairways, alleyways, small squares, picturesque facades and balconies adorned with flowers, views to die for and the wonderful climate even in winter could make you decide to stay some more days in Taormina.

Our day starts in the morning at the Porta Catania, the old town gate towards Catania and Mount Etna, with a typical Sicilian breakfast, a granita al caffè with brioche (half frozen coffee with whipped cream underneath and on top, and a sweet-bread), at the Bar Luraleo No. 2 on Piazza San Antonio. This calories-bomb-start into the day provides you with the energy needed to complete your town stroll.

Passing the Porta Catania, where Taormina’s main (pedestrian) road, the famous Corso Umberto, begins, we’ll find on the right after the old town wall a precious palazzo, the Palazzo Duca di Santo Stefano, which was destroyed in World War II and has been rebuilt in its original style.

Going  back onto the Corso Umberto we head for the Medieval Cathedral, which is only 50 m away. The Duomo di Taormina was built in the 13th century as a fortified church. The Piazza del Duomo was in former times the meeting point of many famous visitors from all around the world, artists, writers and actors. Today it is a wonderful place to relax and sit on the steps of the pretty fountain, which was built around 1600, and is topped by a cute centaur, the symbol of Taormina. For those who already need at this point a caffè or cappuccino we recommend the bar Billy & Billy, which is just opposite the cathedral. 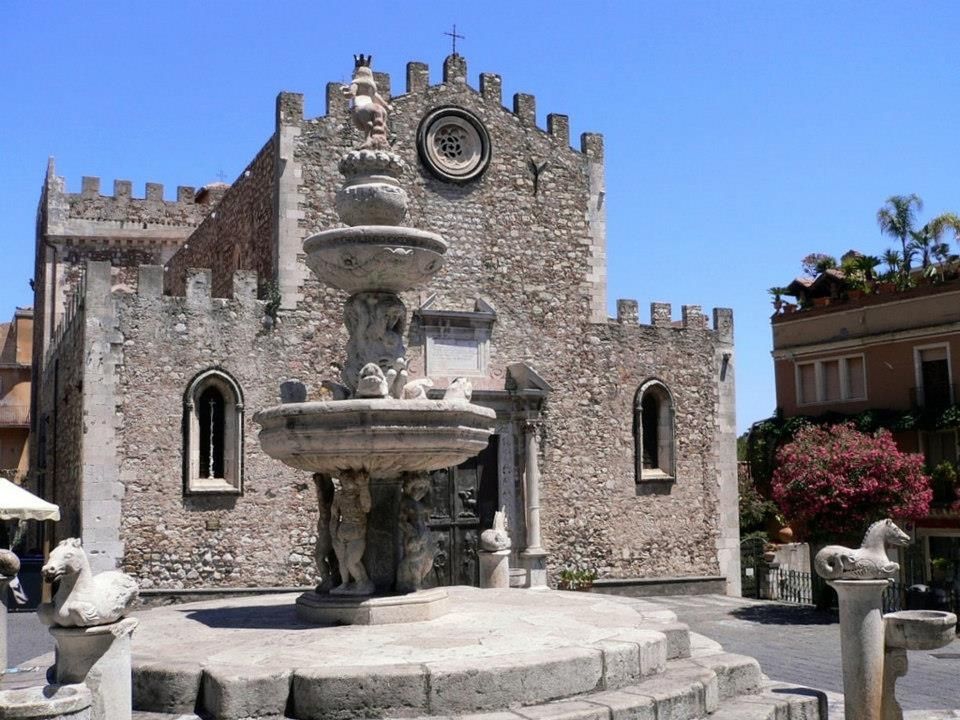 Walking along the Corso Umberto we will get to Piazza IX.  Aprile, the very charming main square. It features a huge panoramic terrace with views of the Med, the bay of Giardini-Naxos and up to Mount Etna. Interesting are the Clock Tower, the Torre dell’Orologio with its lovely mosaic, two churches, the Chiesa di San Giuseppe and the Chiesa di Sant’Agostino with its adjacent convent. Painters are waiting under flowering Oleander trees for customers, folk musicians play, children are running around, tourists are admiring the splendid views, and some people are sitting in the cafes, watching the others. Are you already hungry? Time for a quick bite? The Bar Mocambo welcomes you with cold drinks and snacks. Have a break, sit on their nice terrace and relax in the shade.

You could of course also have a full lunch, there are lots of restaurants nearby on Corso Umberto and in the side alleys. Try some typical dishes with swordfish and other seafood delights, or a pizza.

Refreshed and ready for more sightseeing? Then walk with us further on the Corso Umberto. On the right is a small grocery shop, displaying the most colourful veggies and fruits, nicely and very invitingly arranged, so you’ll probably take a pic – we think that this shop is the most photographed motive in the area.

We head on further to the square Piazza Vittorio Emanuele. Right next to it, adjacent to the church Santa Caterina is a well preserved small theatre, built for the Roman Emperor Octavian, the Odeon.

Walking up the Via Teatro Greco we will come upon the Greco-Roman Theatre, the most famous amphitheatre in the whole of Italy. It is beautifully located on top of a hill, surrounded by lovely scenery and through the broken wall behind the stage you can see on clear days the whole coastline, the dark blue sea and smoldering Mount Etna in the distance  - a lifetime memory.

Located next to the theatre is Taormina’s flagship, the Grand Hotel Timeo. From June to September the chance of celeb spotting is very high on the hotel terrace, because most of the stars, coming to the town for the Taormina Film Fest which opens the summer season of the Greco-Roman Theatre, or performing during summer season in the theatre, stay at the Timeo. 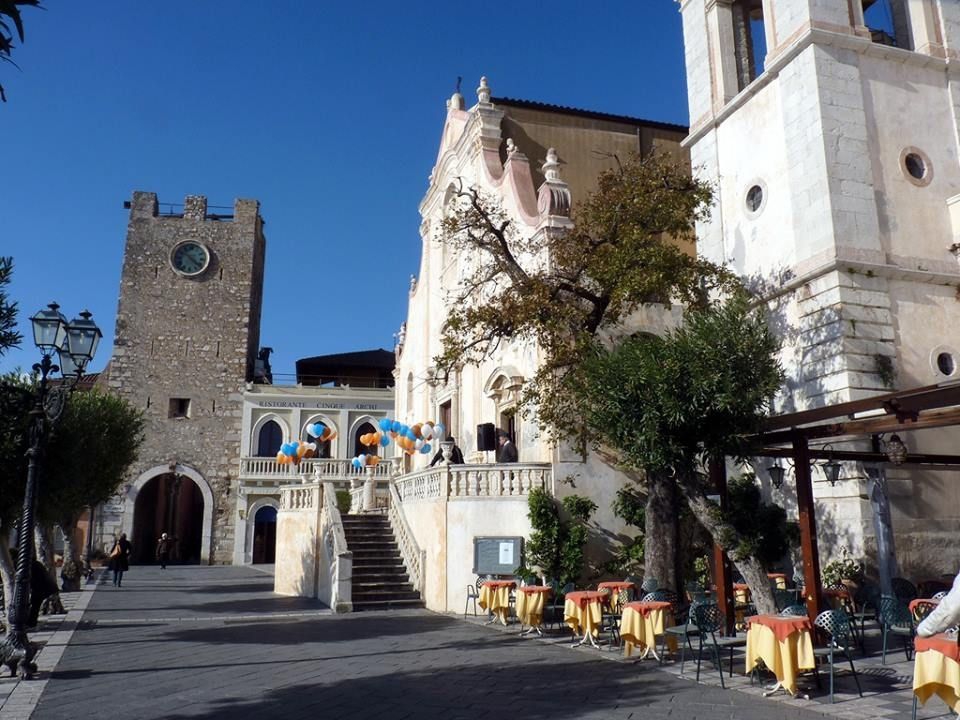 Walking down the Via Teatro Greco we will turn left and go down the shady tree-lined staircase Via Timoleone until Via Bagnoli Croce to the public garden “Villa Comunale”, also called the “Trevelyan Gardens. The town park once was the garden of an English lady named Trevelyan. It is full of rare plants, lush green and eccentric buildings, called the “Victorian follies”. The Villa Comunale is a great place to escape the hustle and bustle of the Corso Umberto, benches invite to have a seat, relax in the shade and admire the panoramic view. Disabled persons just walk (or roll with their wheel chair) down the Via Teatro Greco until the end, make a u-turn to the left and turn again left at the end of the street.

If you would like to have some information about Taormina and its long history, we’ll walk back to Corso Umberto direction Porta Messina, the town gate at the other end of the Corso Umberto. The tourist information is housed in the oldest palazzo of the town, the Palazzo Corvaja. Do we have some time to pay a visit to the museum on the first floor? Yes, we have, the museum is small, but ever so cute. The Museo Siciliano di Arte e Tradizioni Popolari displays  the estate of a local antiques dealer, mostly 18th-century oil portraits, painted glass and embroidery. There is also a small collection of the typical Sicilian hand painted carts. 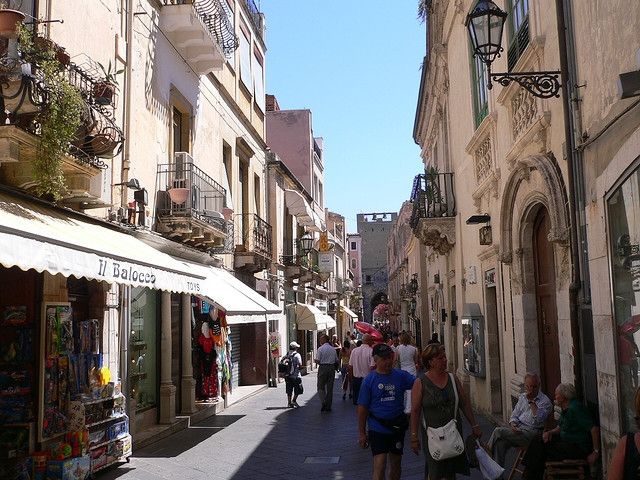 Now it is aperitif time, the Italian version of our Happy Hour, it is time to concentrate on socializing, one thing that is never missing in Italy. There are many bars and cafes to choose from – it depends on what you prefer. A quiet place or  a more lively one? If you opt for the quiet version we’ll go or to BamBar (best granitas in town), or to the Mediterraneo Cafe, both located in the maze of alleyways off Corso Umberto. You’d like to do some people watching while having your Prosecco and nibbling some appetizers? Then we pay a visit to the Re di Bastoni.

For dinner you should allow yourself to try a whole Sicilian menu, from antipasti, first and second course to dessert, of course all washed down with a local wine from the slopes of Mount Etna. Taormina is full of restaurants, nearly all of them good, where to dine only depends on your budget.

After dinner you can spend the night in one of the cool and chic bars on and off Corso Umberto or dance at La Giara. On Thursdays and Sundays the place to go after dinner for both locals and tourists is the Wunderbar, when the singer and entertainer Dino Zullo performs. He guarantees enchanting evenings people are dancing on the square, and everybody has a lot of fun. Or what do you think of sipping a cocktail on the beach under the moonlight and the star-sparkling sky? Then head for one of the Lidos, which turn at sunset from bathing establishments into posh lounge bars, discos and beach clubs. Taormina-Mare is easily reachable in 5 minutes by cable car (running in summer until after midnight).

You have absolutely no desire to leave and decided to stay a little longer in this lovely place? Hotels, hostels, B&Bs and holiday apartments you’ll find here. 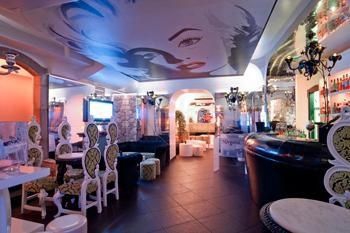