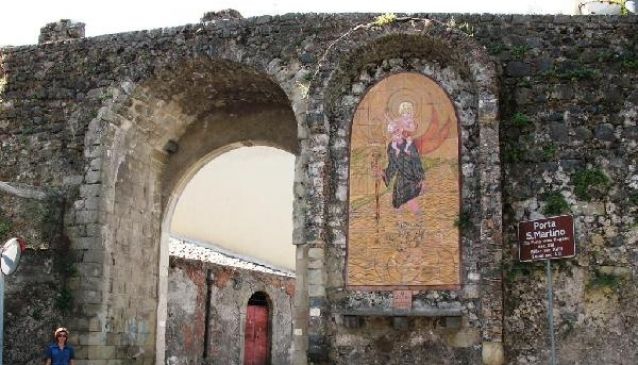 The Town Wall of Randazzo - Sicily

Directions to The Town Wall of Randazzo

Randazzo was surrounded by a wall about 3 km long, probably from the Swabian period, with 8 towers and 12 gates. Today there are only left one tower (of the castle) and few gates.

The Porta Aragonese opens on the longest stretch of surviving walls, and owes its name to the fact that King Peter of Aragon, restoring it along with the walls,  put next to it his emblem. This entrance is commonly known as 'Porta ò  Mustu' because in its vicinity the stationed officers were  in charge of the control of products entering the city.

The Porta San Martino is also known as Porta San Cristoforo, due to  the fresco of the saint that once was there and then replaced in 1983 by a polychrome ceramic composition.

The Porta San Giuseppe is a postern which opens at the top of a short staircase, near the place where once stood the church of St. Joseph.