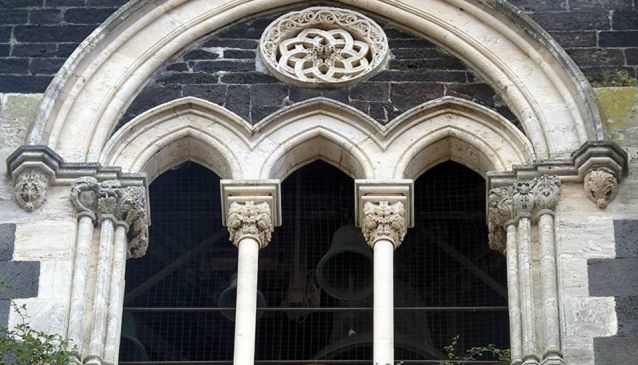 The current structure of the Latin Church of Saint Mary of Randazzo  the result of architectural contributions ranging from the 13th century until 1863, when the bell tower was restored. Unlike in other cases when buiklings have been constructed and renewed over several centuries, the different styles don't create dissonance, but blend in perfectly. The outside is entirely made of black lava stones, the bell tower and the facade  are enlivened by rose windows, arches and sculptures made of white sandstone. The south portal is carved with apses, bas-reliefs and battlements, on top you can see the marble coat of arms of the town. Inside a flight of black monolithic columns divides the aisles, and visitors can admire the Byzantine fresco of the Madonna del Pileri, which is linked to the legend of the origin of the church.