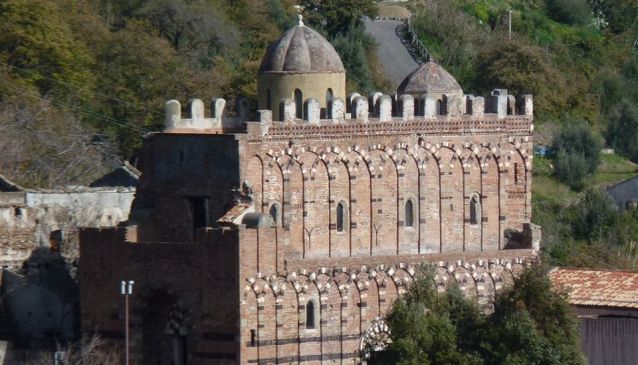 The Church of San Pietro e Paolo di Casalvecchio Siculo is one of the most important structures in the province of Messina. It is characterized by a mix of Byzantine, Arab and Norman styles. The exterior appearance resembles that of a fortress, with two towers flanking the facade. The interior has a nave and two aisles.

Founded by Basilian monks the church was built in 1117 by King Roger II of Sicily and later restored in 1172 as reported by the Greek inscription engraved on the false lintel of the main door. Very unique colour effects are created by alternating bands of brick, lava stone, limestone and sandstone. The main façade is preceded by a portico, enclosed between two towers. The interior has a nave and two aisles, which are divided by Corinthian columns supporting arches. Along the axis of the nave rise two domes, one on a high drum is rolling into wedges and the other in the transept rests on an octagonal drum.