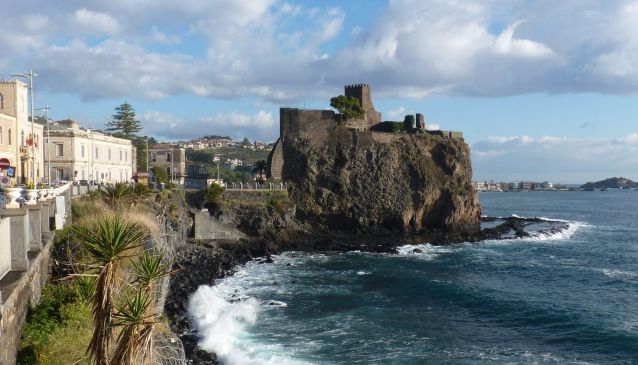 For the highly strategic location the castle of Aci Castello was used as a fortress since Roman times. In 1072 it was conquered by the Norman Roger of Altavilla and after having been repeatedly destroyed it was rebuilt by King Tancredi in 1189.

The castle is made of black volcanic stone and reachable by land only from one side.  In 1126, it became the property of the bishops of Catania and received the relics of St. Agatha, brought back to Italy from Constantinople.

An desastrous eruption of Mount Etna in 1169 damaged a part of the base of the cliff. Since the year 1200 the castle was witness to the clashes between the Aragonese of Sicily and the Angevins of Naples, and was used as a prison in 1787 under the reign of the Bourbons.

Today the castle houses a small museum with an interesting collection of mining stones and archaeological remains.